The proposal states that the robots would not be armed with guns and would only be used to “prevent further loss of innocent lives,” while opponents are arguing against such militarization of the police.

Justin Sullivan/Getty ImagesThe vote to allow the SFPD to use lethal robots has caused waves in San Francisco and beyond.

Armed police robots may seem like something out of dystopian science fiction, but they could soon become a reality in San Francisco. There, the San Francisco Board of Supervisors has voted to allow police officers in the city to deploy armed robots in certain, extreme situations.

In an 8-3 vote, the San Francisco Board of Supervisors agreed to allow the San Francisco Police Department to deploy robots “when risk of loss of life to members of the public or officers is imminent and officers cannot subdue the threat after using alternative force options or de-escalation tactics,” according to the Washington Post.

The San Francisco Police Department further stated that it does not currently possess armed robots and has no plans to arm robots with guns, according to the Associated Press. Instead, it would potentially equip robots with explosives to assist police in certain situations.

These robots would be used “to contact, incapacitate, or disorient violent, armed, or dangerous suspects,” SFPD spokesperson Allison Maxie said in a statement reported by the Associated Press. Maxie added: “Robots equipped in this manner would only be used in extreme circumstances to save or prevent further loss of innocent lives.” 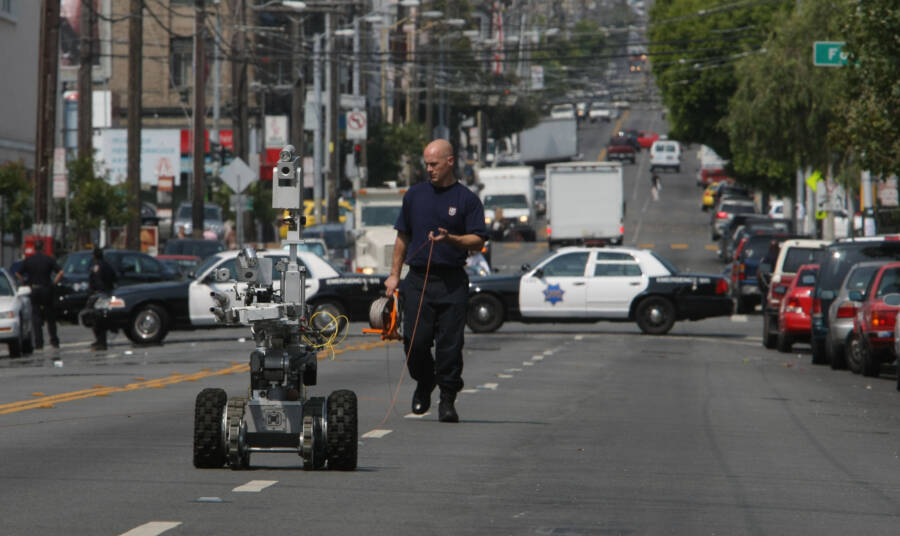 Michael Macor/The San Francisco Chronicle via Getty ImagesThe SFPD already has a number of robots in its possession, like this bomb investigating robot.

The controversial kerfuffle about the police robots was born from a change in state law. The New York Times reports that a law passed last year in California required police departments to seek approval from local governments in order to use military-type equipment.

In response, SFPD offered a tally of its equipment for approval. As The New York Times reports, the police department stated that it possessed a sound cannon, armored vehicles, a launcher that could deploy chemicals, and 17 robots, 12 of which are functional. These robots could climb stairs, defuse bombs, and transmit instantaneous video and audio.

The robots were not armed. But SFPD explained that the “robots could potentially be equipped with explosive charges to breach fortified structures containing violent, armed, or dangerous subjects,” per The New York Times. 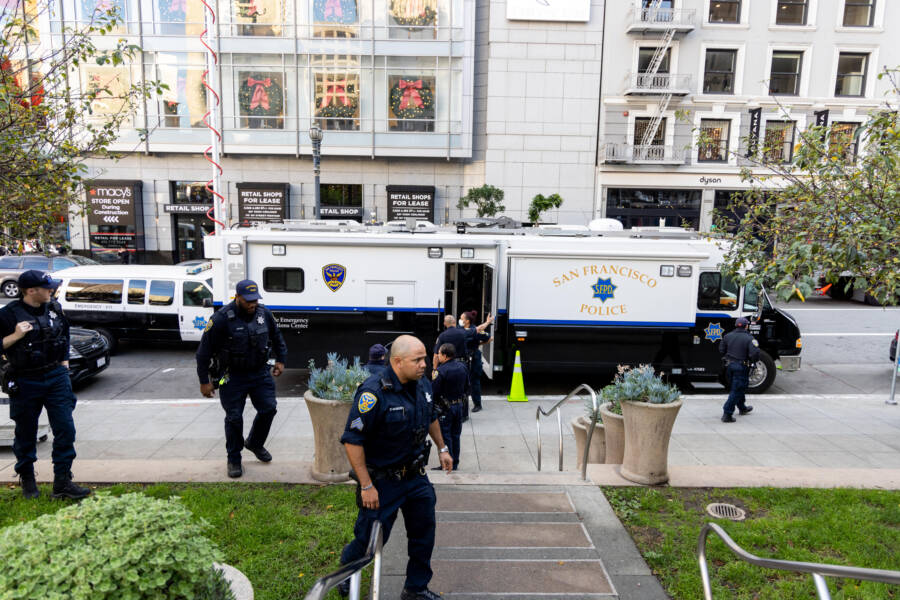 Ethan Swope/Getty ImagesPolice near a SFPD van in San Francisco in 2021.

But this detail about arming robots has caused waves in San Francisco. According to the Washington Post, even the San Francisco Public Defender’s Office waded in the fray, writing in a letter to the San Francisco Board of Supervisors that such a policy would be “dehumanizing and militaristic.”

What’s more, many are concerned that armed robots would be deployed mostly against people of color.

“Most law enforcement weapons are used against people of color,” board president Shamann Walton said according to the Washington Post. “I’m really just stunned that we’re here talking about this.”

Walton insisted that his opposition to the measure was not anti-police, but pro-people of color. “We continuously are being asked to do things in the name of increasing weaponry and opportunities for negative interaction between the police department and people of color,” he said according to the Associated Press. “This is just one of those things.”

Hillary Ronen, a city supervisor who voted against the policy, agreed. Armed robots, she said according to The New York Times, create a “false distance that makes killing the individual easier. We don’t want it to be easy. We don’t want to create that distance and that removal from the emotional impact of killing, of taking an individual’s life.”

But others see things differently.

“If I was in charge, and I had that capability, it wouldn’t be the first on my menu,” Adam Bercovici, a law enforcement expert and former Los Angeles Police Department lieutenant, told the Washington Post. “But it would be an option if things were really bad.”

Advocates have argued that police have successfully used armed robots before. In 2016 in Dallas, Texas, a police robot armed with explosives killed a sniper who had killed five police officers. But opponents don’t believe that armed robots should become the norm.

In any case, the measure still has some hurdles to surmount before it becomes law. On Dec. 6 it must be approved by the board again, then signed by San Francisco Mayor London Breed.

After reading about the debate over armed police robots in San Francisco, learn about the robot wolves deployed in Japan. Then, read about the world’s most bizarre weapons.