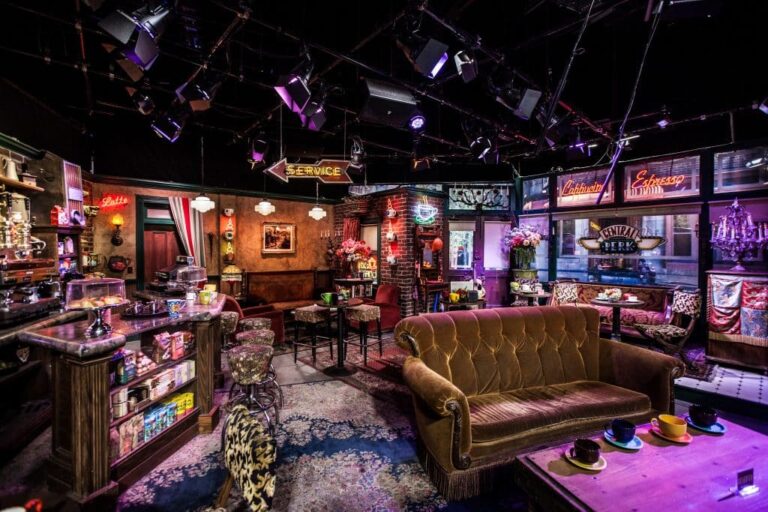 Matthew Perry was once upon a time the funniest and most beloved man in Hollywood. Playing hilarious and lovable Chandler in the hit comedy sit-com Friends, it seemed on the surface that he was just as full of joy as the character he played. However, during these 10 memorable seasons, there was a dark truth hiding behind the camera. Matthew Perry was suffering from addiction and drug abuse during the filming of Friends, and he opens up about it extensively in his new autobiographical book: Friends, Lovers and the Big Terrible Thing.

These 6 actors went from nobodies to stars in a matter of days as their lives changed forever. However, whilst fame seems from the outside like paradise, Perry and many other icons are proof that it doesn’t come without its loneliness and complexities. How could Chandler – the comedic hero – be so miserable deep down? Let’s find out.

In 1994, the first series of Friends began and no one really knew what this show would soon end up becoming. The show – following Rachel, Ross, Chandler, Monica, Joey and Phoebe – is about 6 best friends who tackle their late 20s in New York together. The show resonated with the world, not only because these characters were so darn loveable, but also because that specific time in their lives was an experience that many could relate to.

To stay current on everything important happening in the industry, as well as gain access to deals on cannabis flowers, vapes, edibles, and much more (various cannabinoids to choose from), make sure to subscribe to The Cannadelics Weekly Newsletter. Enjoy responsibly!

Over its lifespan from 1994-2004, Friends received 62 Emmy nominations, and won 6. It has been described by some as the best sit-com to have ever graced our screens. But what made it so great? Why did millions of viewers tune back in to watch again and again as the 6 friends entered their favorite coffee shop, Central Perk, and went about their day? The New York Times writes:

“Familiarity is the magnet of every decent American sitcom… the many nights I’ve spent recumbent on my sofa laughing at, say, Ross and Phoebe debating evolution, or Phoebe, Joey and Ross impersonating Chandler, or Chandler blanching at Monica’s desperate new cornrows or Rachel taking forever to tell somebody who the father of her baby is… They’ve only ever been about us — me and these six people — and my apparently enduring need to know what they’re up to and how they are”

This is exactly what the series did so well. These weren’t just characters in a TV show, they were our Friends, they were us. Every character highlighted a different neurosis or trait that all of us seem to share, or at least know someone that does. Plus, with ten seasons and 236 episodes, it’s no wonder that fans felt they knew these people personally. However, how is it then that the actor playing Chandler could have hid his drug abuse from the public for so long? Although perhaps it wasn’t so hidden after all. According to Matthew Perry, when you look back through the show, it seems obvious what substances he was taking based on his fluctuating weight. He writes in his new book:

“You can track the trajectory for my addiction if you gauge my weight from season to season… When I’m carrying weight, it’s alcohol; when I’m skinny, it’s pills. When I have a goatee, it’s lots of pills.”

If you’re a fan of Friends you’ll recall Chandler’s varying looks throughout the season. Some years he’d be much larger, and others he’d be extremely thin. Of course, it’s not something that many would have thought too much about but, when you re-watch the sit-com, the evidence was right there in front of us.

When covid brought us a well desired Friends reunion in 2021, everyone hoped we’d see the 6 of them back at their very best. Whilst they may have looked a lot older, the connection was definitely there between them and their comedic talent had not been lost. However, it was evident that Matthew Perry was not the same charismatic, confident man as we’d seen. He seemed, in want of a better word, slightly broken.

Matthew Perry’s life has been riddled with anxiety and depression. In therapy since he was 18, he has had 14 rehab stays, 65 detoxes, 14 surgeries and 6000 AA meetings. Perry has likened himself to Chandler in a lot of ways, using laughter and comedy to disguise a deeper sadness underneath. Nonetheless, it was a jet ski accident in 1997 that began his problem. The pain caused him to become addicted to Vicodin, other pills and then alcohol.

For those who don’t know, Vicodin contains the opioid pain reliever hydrocodone. Like with any opioid substance, the threat of addiction is high. In fact, there was a point where the actor was consuming a quarter bottle of vodka and 55 Vicodin a day. He would go to several doctors and fake injuries just to quench his habit. Many have asked Perry how it is possible that a man who seemed to have everything, could have such problems with substance abuse. His reply was this in 2002 to the New York Times:

“When [fame] happens, it’s kind of like Disneyland for a while. For me it lasted about eight months, this feeling of ‘I’ve made it, I’m thrilled, there’s no problem in the world.’ And then you realize that it doesn’t accomplish anything, it’s certainly not filling any holes in your life… I didn’t get sober because I felt like it. I got sober because I was worried I was going to die the next day.”

Like with many stars before him – such as Elton John and Johnny Cash – Matthew Perry came to the realisation that fame did not bring him ultimate happiness. Plus, the need to go on set and play funny Chandler every day, gave him an astonishing amount of pressure. In 2000, Perry was hospitalized for alcohol-related pancreatitis. As a result, he began detoxing during the filming at the end of that year, which is why his appearance changed drastically between series 6 and 7.

What then ensued was years of attempted recovery and detox, followed by a return to substance abuse. In fact, the actor himself has admitted to not really remembering the filming of much of Friends, simply due to how out of it he was. However, after the end of Friends, Perry seemed to be doing better at points. But the substance abuse had done its damage and at the age of 49 he suffered a near-death experience. His colon burst due to opioid overuse – including the likes of oxycontin – and he was given a 2% chance to live. However, he survived and swore to never have to use a colostomy bag again. Over the years, Perry has apparently spent around $9 million on his sobriety and at the age of 53 he is now proudly 18 months sober.

Matthew Perry has never shied away from speaking about his troubles and addictions. In fact, he believes that the more he opens up, the more he can help those who are in the same situation that he was. His new book is no different. It is unflinchingly honest. He mentions his relationship with Julia Roberts, and his desire to break things off in order to protect himself against heartbreak. He also recounts his admiration for Jennifer Anniston at the beginning of Friends, but her turning him down. But beyond some of the celebrity gossip, Matthew Perry highlights yet again how Hollywood and fame really isn’t the answer to anything.

However, he writes himself that you have to become famous to realize this, and no one who is not will ever believe that. He believed that being cast as Chandler Bing in a new sit-com would somehow take the pain away, but sadly only drugs and alcohol could do that. In his new autobiographical book, Perry does not always come across as a good person, and often writes slightly unlikeable things. For example, he ponders why Heath Ledger – an original thinker – is dead, but Keanu Reeves – the opposite – still walks among us. Nonetheless, Perry self-deprecates in a way that brings him down to Earth. He steps his feet on the ground, walks amongst humans, and allows for us to judge him. His life story is nothing short of depressing and far from what Friends fans would have wanted or expected. The Guardian writes:

“It’s harrowing and revealing about the juncture where extreme compound addiction collides with mega-celebrity. It’s a scream of authentic human pain, albeit one sprinkled with stardust. You end up admiring his honesty.”

Matthew Perry spends millions on healing his addictions, which is an amount of money that the majority of people would not have. Perhaps without his riches he would be dead right now. Or perhaps without his fame, he would not have gone into the deep hole of addiction that he did. We will never know. Nonetheless, there is no doubt that becoming famous has proven again and again to not guarantee ultimate happiness and indestructibility.

Thanks for stopping by!! Welcome to Cannadelics.com; an independent news platform where we work hard religiously to bring you the best in cannabis and psychedelics reporting. Hang out with us frequently to stay aware of all updates, and subscribe to our Cannadelics Weekly Newsletter, so you’re always first to get the news.