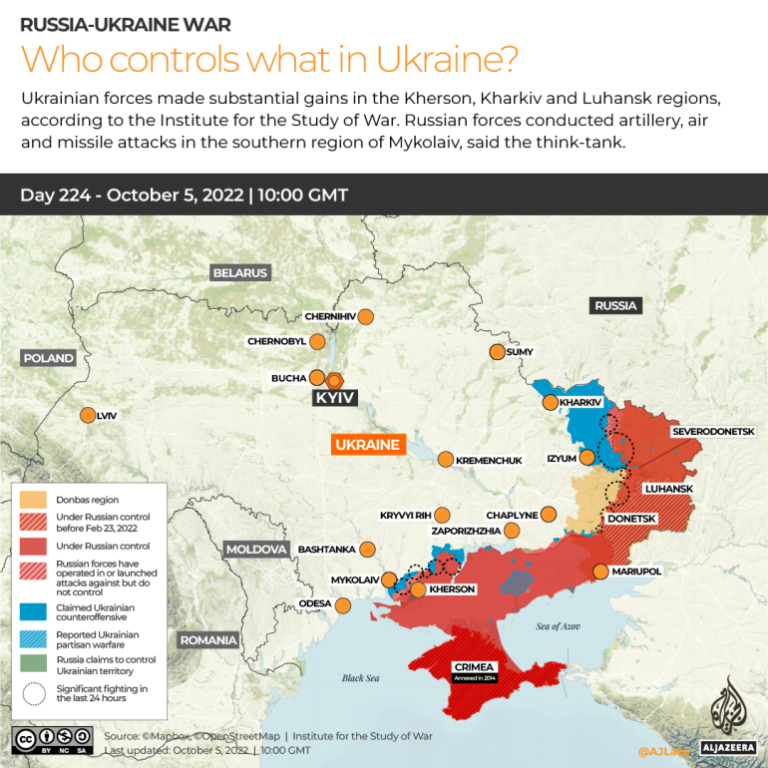 Russia’s mobilisation of 200,000 conscripts seems to have had no impact during the 32nd week of the war, as Ukrainian forces recapture more territory in the east and south of the country.

On September 30, Ukrainian forces advancing from Izyum surrounded Lyman in the eastern Donetsk region and recaptured the town the following day. The spectacular encirclement of the strategic town and an expanse of surrounding territory trapped Russian personnel trying to flee.

“There has been a decrease in the level of moral and psychological state of enemy personnel, leading to numerous instances of soldiers … abandoning their positions,” said the general staff.

The fall of Lyman came on the very day Russia fielded new troops from its September 21 compulsory mobilisation.

In an address to the Ukrainian people on October 3, Ukrainian President Volodymyr Zelenskyy said these Russian reinforcements were already being killed.

“Among the dead occupiers, we can already see those who were taken just a week or two ago. People were not trained for combat, they have no experience to fight in such a war,” Zelenskyy said.

“But the Russian command just needs some people – any kind – to replace the dead. And when these new ones die, more people will be sent. This is how Russia fights. That’s how it will lose, as well.”

Lyman was considered a major logistics hub for Russian forces. In Ukrainian hands, it could speed up counterattacks in the Donetsk and Luhansk provinces and strengthen partisan action behind enemy lines.

Meanwhile, the militia of the pro-Russian self-proclaimed Luhansk People’s Republic said it had repulsed “repeated attempts” by Ukrainian forces to break through to the oil refinery at Lysychansk, the last city to fall to Russian forces in that region on July 3. The militia also reported “fierce battles” for neighbouring Kreminna.

Despite this, Russian forces in the east doggedly stuck to an advance towards Bakhmut, a transport node in Donetsk they have been trying to capture for weeks.

Three days after the fall of Lyman, Ukraine’s southern forces scored a major victory, too, advancing 30km (18.6 miles) down the west bank of the Dnieper River – their most rapid advance of the war.

In a single attack, they destroyed 31 Russian tanks, Ukraine’s southern command said. The following day Ukrainian marines recaptured Davydiv Brid in the Kherson region, and a separate advance into Kherson from the west retook the town of Myrolyubivka.

Should it continue, Ukraine’s recapture of the west bank of the Dnieper River could leave an estimated 25,000 Russian soldiers stranded.

“The fact we have broken through the front means that … the Russian army has already lost the ability to attack, and today or tomorrow, it could lose the ability to defend,” Oleh Zhdanov, a military analyst based in Kyiv, told the Reuters news agency.

Ukraine’s deputy chief of military intelligence, Vadym Skibitskiy, told the news website Krym.Realii that Russia had redeployed Black Sea Fleet service personnel from the Sevastopol naval base in Crimea to Novorossiysk, southern Russia, to avoid casualties, after a series of explosions.

Crimea, annexed by Russia in 2014, has acted as a staging area for Russian personnel and equipment, supporting the invasion of Kherson and Zaporizhia in the early days of the war.

Ukraine has made clear it wants the peninsula back and has made devastating use of 16 US-supplied High Mobility Artillery Rocket Systems (HIMARS) in its September counteroffensives.

On October 1, a lend-lease facility that speeds up the supply of US weapons came into force, and in two separate announcements, the US Department of Defense said it is sending Ukraine 22 new HIMARS rocket launchers and ammunition.

The head of Ukrainian intelligence services predicted that after a lull for the European winter, Ukrainian forces would likely enter Crimea by the end of spring, in mid-2023. Kyrylo Budanov said Russia’s mobilisation would not present a challenge.

“There is no need to be afraid of mobilisation. In fact, it is a gift to us. This will only speed up the process, which is already impossible to stop,” said Budanov in an interview with television channel 1+1. 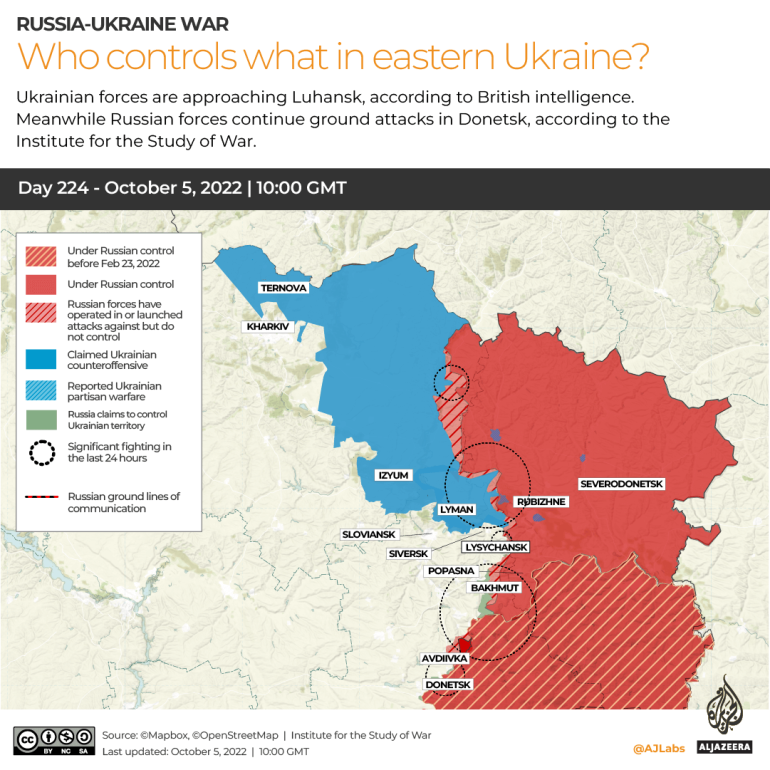 A rift with Kadyrov

The fall of Lyman revealed a rift between Russian regular forces and Chechen leader and militia commander Ramzan Kadyrov, who openly criticised the Russian commander in the east, Alexander Lapin.

“The colonel-general posted mobilised fighters from the [Luhansk Peoples’ Republic] and other units at all the frontiers of the Limansky direction, but did not provide them with the necessary communication, interaction and ammunition delivery,” Kadyrov wrote on Telegram.

“If it were up to me, I would demote Lapin to a private … and send him to the front lines to wash away his shame in blood.”

Kadyrov is a valued Kremlin ally and his troops, along with those of the private Wagner Group militia, have been responsible for many of Russia’s successes in Ukraine. Putin on October 5 rushed to appease him, phoning him to tell him he had been promoted to the rank of colonel general.

The rift with Kadyrov may have begun as early as April, when reports surfaced that his militiamen had killed three Russian soldiers who were ready to surrender.

It became more open in July, when Russian President Vladimir Putin demanded a battalion from each of Russia’s regions through voluntary conscription. Kadyrov, whose Chechen republic has already supplied three battalions to the fight in Ukraine, said he would not contribute more.

After the fall of Lyman, Kadyrov also said Russia should contemplate the use of low-yield “tactical” nuclear weapons in Ukraine.

Nationalist Russian lawmaker Leonid Slutsky alluded to nuclear weapons as well, saying “all possible means” should be used for their defence of the Donetsk and Luhansk People’s Republics.

This had probably been the intended implication of Putin’s announcement of annexation on September 30 of the four regions his forces partially occupy – Luhansk, Donetsk, Zaporizhia and Kherson.

Kremlin spokesman Dmitry Peskov said any attack on the annexed regions would be considered an attack on Russia itself.

But on October 3 Peskov suggested the Kremlin would take a flexible stance with respect to what it considers Russian territory.

“We are going to continue to consult the populations of these regions,” Peskov said. “No doubt, any configuration will depend only on the will of the people who live in a particular territory.”

He also issued an implicit rebuke to Kadyrov for his statements on nuclear weapons.

“The heads of regions have the authority to express their point of view … all the same, probably, emotions should be excluded from any assessments, so we prefer to stick to very balanced, objective assessments,” he said.

The United States said it saw no evidence that Russia was readying nuclear weapons for battlefield use.

“We are looking very carefully to see if Russia is actually doing anything that suggests that they are contemplating the use of nuclear weapons. To date, we’ve not seen them take these actions,” US Secretary of State Antony Blinken told a news conference in Washington with his Canadian counterpart.

Ukraine’s reaction to the annexation was an application for fast-track NATO membership.

“We are taking our decisive step by signing Ukraine’s application for accelerated accession to NATO,” Zelenskyy said.

He explained what that meant in a phone call with Danish Prime Minister Mette Frederiksen.

“We need to get through this as quickly as possible without a Membership Action Plan. As it was done for Finland and Sweden,” said Zelenskyy.

His justification for rapid membership is that it is, in effect, an alliance member already.

“We are de facto allies,” he said. “We have already proven compatibility with Alliance standards.

Zelenskyy also hardened his stance towards negotiations further, calling for a leadership change in Russia as a precondition to talks.