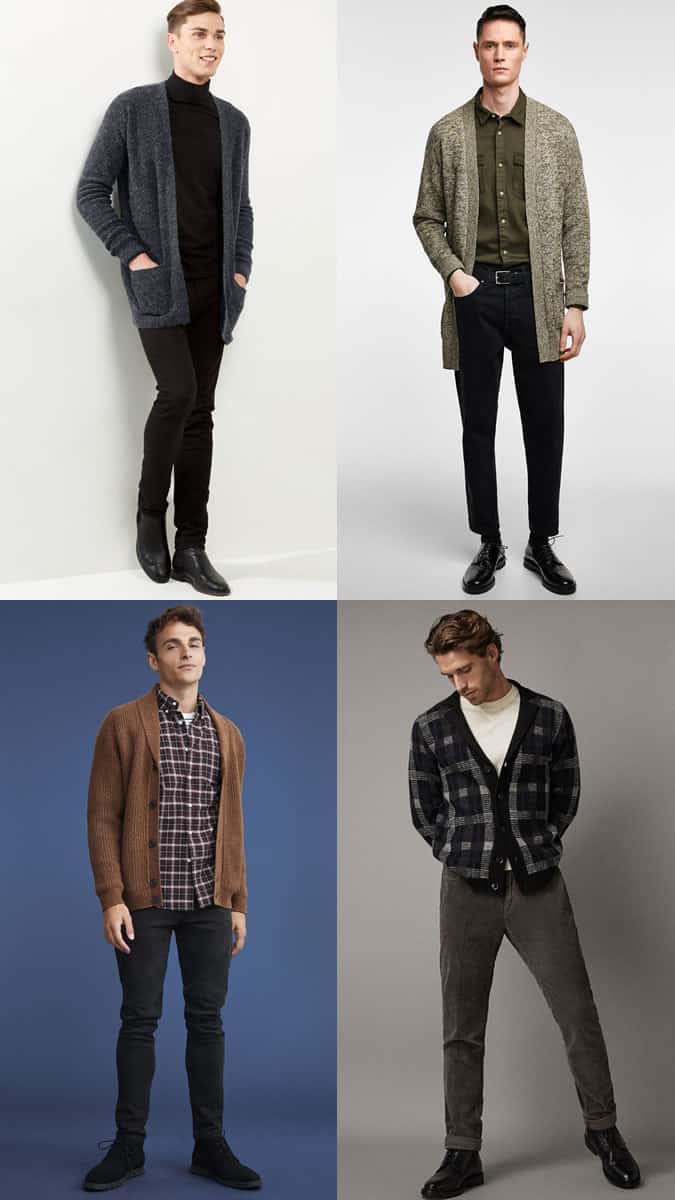 How To Wear A Cardigan Without Looking Like Your Grandad

Earl of Cardigan blah blah blah 19th century snooze… We’ll skip the history lesson and just tell you that cardigans are back. Thank the oversized silhouettes of designer Raf Simons, or A$AP Rocky in , or the ghost of Kurt Cobain, whose grungy, thrifted aesthetic has circled back into fashion.

Despite the endorsement of such swag lords, even the best cardigans still scare many men compared to other once-dodgy jumper styles like roll necks or cable knits. So we’ve compiled some 21st-century styling moves that will help you avoid giving off granddad vibes. Like, say, taking the empty Werther’s Originals wrappers out of your pockets.

This is not your dad’s guide to how to wear a cardigan. And certainly not his dad’s. Follow these tips to smell more like teen spirit than Old Spice. Or mothballs.

Without Kurt Cobain’s intervention, it would be very difficult to look rebellious in a cardigan. Not that it was intentional on his part – he didn’t much care about clothes and his look was more the product of the thrift stores that kept Seattle’s grunge kids warm.

Today, assuming you don’t want to look like you’re sleeping in your drummer’s mother’s basement, the look (partly adopted by hip-hop’s best dressed men) is cleaner and tidier. Keep Cobain’s long-line cardigan and look for some additional interest – mottled wool, a ribbed texture or pared-back pattern. Then wear it over a plain tee or cotton shirt. Down below, wider-leg denim or some cropped trousers update the look, but if you want to keep your skinny jeans, well, never mind.

There’s a specific kind of creative person who advertises their creativity by wearing something that doesn’t look very creative at all. It’s quite meta. If you’re that person, a simple merino cardigan could be a cornerstone of your wardrobe. The look in question is neat, a little bit grandad, a little bit mid-century, with not much in the way of texture and certainly no patterns.

For extra interest, leave the colours muted or tonal and play with proportions instead. Tuck your shirt into some cropped tailored trousers. The higher break around your waistline will make the length of the cardigan a flattering focal point. Finish with some unflashy, normcore-friendly footwear. A sensible pair of Derbies is just the job.

If you want to de-fuddy-duddy the cardigan, look no further than the Italians who, true to form, wear it as a chic and elegant mid-layer. The sprezzatura look is about looking tailored and together, but with some individual touches that make the outfit yours. Here, a cardigan can help.

Wear it instead of a blazer or under a blazer for a layer few others will think of and use a tonal colour palette to signal – subtly – that you know exactly what you’re doing. Browns and creams, straight from your grandad’s wardrobe, are the most wearable shades, worn with casual tailoring in grey and mocha. And don’t forget the shawl collar. Buono.

The Great Outdoors (In The City)

The cardigan is something of an unsung hero of layered outfits, stuck in the middle and too often out of sight. In cold weather, make it the hero piece, as you would a cable-knit jumper or fisherman knit. Done right, it’s warm, functional outdoors gear made suave for the city.

Keep the cable-knit design and wear it over a check shirt and T-shirt, or even a thinner gauge cardigan (every new layer should be thicker than the last, remember). Slip a down jacket or parka over the top if conditions demand.

You can keep the back-to-nature aesthetic without looking like a lumberjack at a fancy-dress party, too. Just stick to a palette of earthy tones – green, stone, brown – and ground the look with boots that are sturdy, but not full-on hikers. Leave them in the woodshed with your axe.

One thing your pappy had right about cardigans was this: they’re perfect binge-watching attire. For the Netflix generation, that means wearing the cardigan as loungewear, pairing it with joggers, lazy tees, and extra layers of fine knitwear – but smart versions across the board. No one watching your Instagram story should spot any cereal stains.

The look you’re going for here is a well-groomed sloth. The cardigan should be spotless, yes, but it can also be loose and lacking in structure. Stick with athleisurely tones like grey and heather and, if you absolutely have to leave the house for supplies, go with some low-key sneakers and a beanie.

Blame Mark Zuckerberg, blame dress-down Fridays, but office dress isn’t buttoned-up and boring anymore. In all likelihood, it won’t be ever again. But even if your HR department doesn’t agree that your favorite Stussy hoodie is business appropriate, you can meet them in the middle with a fine-gauge cardigan.

Slip one under a blazer as a business-casual alternative to a waistcoat when the AC’s on full blast, or leave the jacket at home and wear one over a button-down tucked into chinos. Even if you keep the tie, the cardigan is license to dress down your footwear. Leave the Oxfords in the closet and slip into some minimalist sneakers or loafers instead.

The Best Cardigans For Men

What is a cardigan if not the ultimate in preppy wardrobe essentials? And what is Polo Ralph Lauren if not the finest Ivy League-style outfitter on the face of God’s green Earth?

The New York mainstay has spent the past 40-plus years securing a firm foothold as the go-to brand for the sort of clothes you could wear to meet your new partner’s conservative parents, without sacrificing your style credentials along the way. And while cardigans may only be a small piece of the puzzle, it’s one that Ralph Lauren places with surgical precision.

The high street’s honeypot for normcore kids and Scandi minimalists, Cos is big on muted colors and boxy fits. The aesthetic extends to its knitwear with cardigans that tend to be thin, cropped, and traditional or longline and wooly. And almost exclusively in black or grey.

Heritage British knitwear label John Smedley is well known for spinning the finest merino and cashmere yarns in all the land. And by land, we mean Scotland: the undisputed home of all things woolly. Expect fine-gauge knits, unbeaten attention to detail and a level of quality that has been backed by everyone from Bond to the Beatles. Does it get any better than this? Doubt it.

If Nirvana frontman Kurt Cobain was alive today, where would he be picking up his cardigans? Far be it from us to profess to know, but if we had to hazard a guess, we’d probably go with AllSaints.

The east London favourite is known for its grungy aesthetic and the stacks of vintage sewing machines lining the windows of every outpost from London to New York City. And no wonder they’ve been retired to window displays – evidently, these things have been hard at work crafting the best slouchy cardigans around. Thought a knitted button-up couldn’t be rock and roll? Think again.

It might be where your dad shops, but you shouldn’t write British high-street stalwart Next off when shopping for some A-grade office-appropriate knitwear.

Here you’ll find slim-fitting, form-flattering cardigans at fair prices. Granted, if you’re looking for a statement piece with patterns and prints, it may not be the best option. However, if you’re seeking something understated that can be slipped over a button-down shirt, or even under a blazer, Next has most certainly got you covered.

It’s the Swedes that are best at low-key, high-quality wardrobe staples, right? Wrong, the Japanese know their way around a premium basic too. The only difference is that Uniqlo’s offerings will leave you with enough change for some Ikea meatballs …or a bowl of ramen.

The Nippon-born high-street chain has spent the past few years launching a full-blown assault on the global high street, and knitwear just happens to be one of its most powerful weapons. From fine-gauge lambswool for less than a round of drinks to cashmere that won’t clear you out – Uniqlo has the lot.

The humble cardigan cemented its place long ago as a preppy icon. But did you know it’s got its woolen claws into more than one fashion subculture?

Along with Vespa scooters, tailored suits, and parka coats, this knitted essential is also a cornerstone of the mods. And you don’t have to be Paul Weller to know that Fred Perry is one of the biggest names in the game when it comes to that sort of thing. So, get your French crop Brylcreemed to perfection, jump on the moped and slap one of these bad boys on to complete the look.

Rewind 10 years. You’re schlepping down to the shops in your indie drainpipes, pointy shoes, and waistcoat to pick up a cardigan. Where do you go? If you answered anything other than, “Topman”, were you ever even a teenager at all?

Perhaps not. But, regardless, the British high-street hero is still the go-to establishment for indie-inflected knitted button-throughs. Expect unrivaled variety, fair prices, and body-hugging cuts aplenty.

You know how we said Scotland is the spiritual home of quality knitwear? Well, if you didn’t believe us, you need only look to the work of Inverallan for all the evidence you could possibly need.

This heritage brand began life as an outfitter for Scotland’s intrepid fisherman and its wares have been hand-knitted by skilled locals for generations. If you’re serious about your clothing and believe in the “buy less, but better” mantra, Inverallan is the only place to go.

Unsurprisingly, the Spanish fast-fashion titan does a lot of cardigans, and at some of the most accessible prices, you’ll find anywhere. Head here particularly for sprezzatura-friendly chunky knits or grungy longline options that your black jeans will love.

It’s where your grandad got his cardigans from and it’s where you should too. The grand old duke of the great British high street stocks almost every style of the cardigan but it’s particularly reliable for fine-gauge options for the office and chunky shawl-collars you’ll turn to again and again in winter.