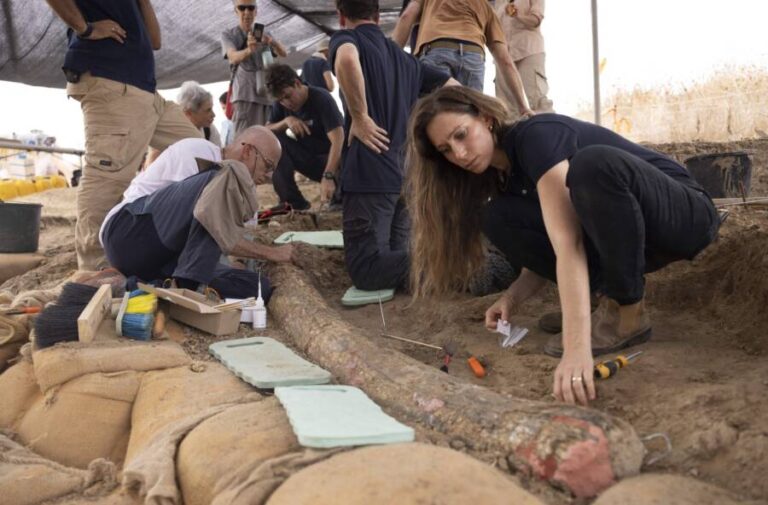 At eight feet long and 500,000 years old, this tusk is not only one of the biggest fossils of its kind found in the Near East but also one of the best preserved.

MENAHEM KAHANA/AFP via Getty ImagesThe elephant tusk, found by Dr. Eitan Mor, is the largest complete fossil tusk ever found in Israel or the Near East.

Researchers working near Kibbutz Revadim in southern Israel made an extraordinary discovery when they unearthed an immaculately well-preserved elephant tusk — that’s half a million years old.

Per The Times of Israel, the excavation was organized by biologist Eitan Mor, who launched the so-called “Operation Elephant” in an effort to learn more about the significance of prehistoric elephants in early human culture.

The tusk measured just over eight feet long and belonged to an ancient extinct species of straight-tusked elephants that scientists believe arrived on Israel’s coasts roughly 800,000 years ago and died out around 500,000 years ago — the same age as the newly discovered tusk.

“To my surprise, I spotted something that looked like a large animal bone peeping out of the ground,” Mor recalled of his historic find. “When I looked closer, I realized that it was ‘the real thing,’ so I rushed to report it to the Israel Antiquities Authority.”

Researchers noted that the tusk is “extremely fragile,” and they have been making extra effort to ensure that it remains intact as they excavate it from the site.

“Now we are excavating it within its archaeological context, before transferring it to the Israel Antiquities Authority Conservation Laboratory, where it will be studied and conserved,” said Israel Hershkovitz from Tel Aviv University’s Dan David Center for Human Evolution and Biohistory.

As Haaretz reported, the exact species of elephant to which the tusk belonged remains unknown but is something researchers hope to identify. 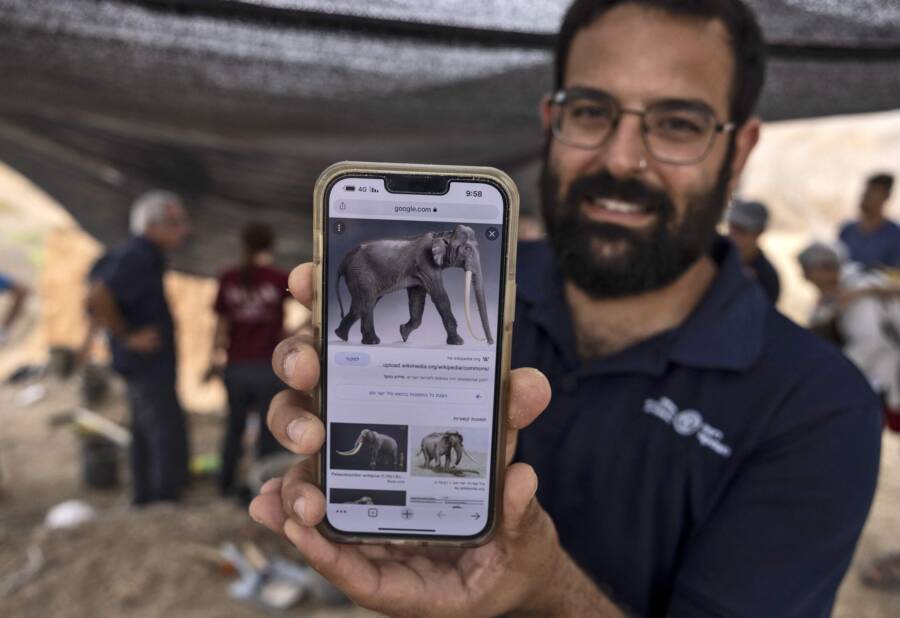 MENAHEM KAHANA/AFP via Getty ImagesAvi Levy, an archaeologist from Israel Antiquities Authority, showing a photo of an ancient straight-tusked elephant at the site where his team found the eight-foot-long tusk near Kibbutz Revadim.

This is also the second instance of an ancient elephant tusk being found in the region.

The first had been found decades ago while establishing infrastructure for a water system, and measured roughly five-and-a-half feet — a fair bit smaller than this most recent discovery.

Additionally, the newly discovered tusk is largely unbroken — a rarity for frankly anything that old. The research team is working cautiously to ensure that it remains that way.

As they prepare to excavate the tusk in its entirety, the research team has been working to strengthen it with situ, using polymers and plaster similar to how broken bones are treated in hospitals.

“The more complete we get it out, the better it can be conserved,” said Ianir Milevski, the Israel Antiquities Authority’s (IAA) head of prehistory.

And while this only marks the second instance of an ancient tusk being found, archaeologists working at the open-air site have frequently found other elephant remains there — as well as evidence of hominin populations occupying the area.

In particular, researchers have unearthed ancient Paleolithic weaponry such as large hand-axes that would have been used to hunt massive animals like ancient elephants. Many researchers believe these early human populations did indeed hunt these ancient beasts, as one elephant could provide ample meat for a small tribe.

Meanwhile, the elephant’s fat, bones, marrow, and skin could be fashioned into tools as well. 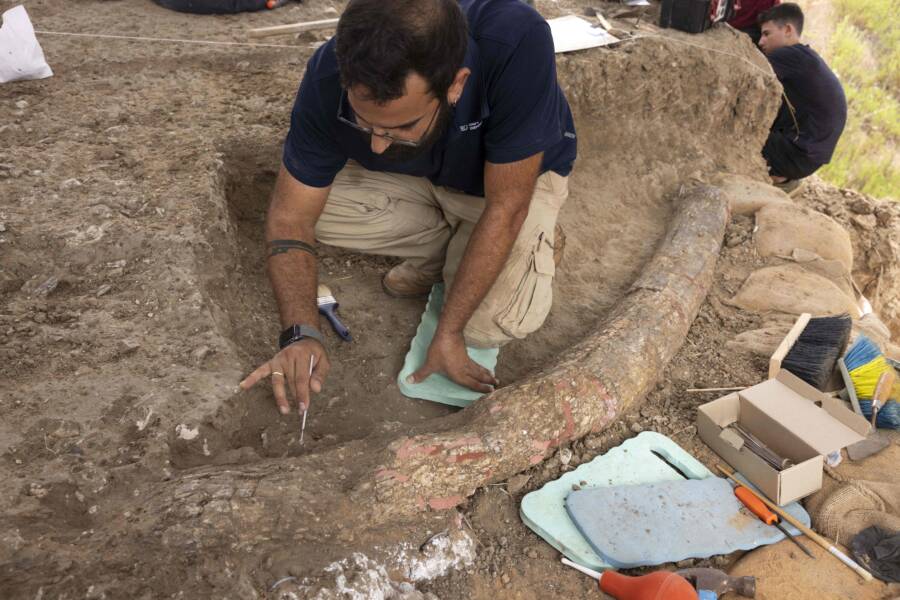 MENAHEM KAHANA/AFP via Getty ImagesResearchers from the Israel Antiquities Authority, Tel Aviv University, and Ben-Gurion University, at the site in southern Israel on Aug. 31, 2022.

Some ancient humans had even fashioned bits of elephants into huts, as evidenced by archaeological research in Siberia.

Curiously, the unearthed ancient tools found in the region seem far more advanced than those typically employed by Homo erectus, the ancient human species commonly believed to have hunted in the region at the time.

The newly-discovered tusk in Revadim could help to answer some of the researchers’ biggest questions about the nature of the prehistoric animal itself as well as the early humans who hunted it.

“Is the tusk the remains of a hunted elephant, or was it collected by the local prehistoric inhabitants? Did the tusk have social or spiritual significance?” Milevski and fellow researcher Ofer Marder of Ben-Gurion University asked.

To help answer these questions, conserving the large tusk is of “primary importance for the academic community, but also of great public interest,” said the IAA’s director, Eli Eskozido.

While we wait to see what new insights this elephant tusk might generate, why not learn about the world’s oldest-known brewery found at an ancient Egyptian burial site? Or, read about this ancient piggy bank that was unearthed in Israel.