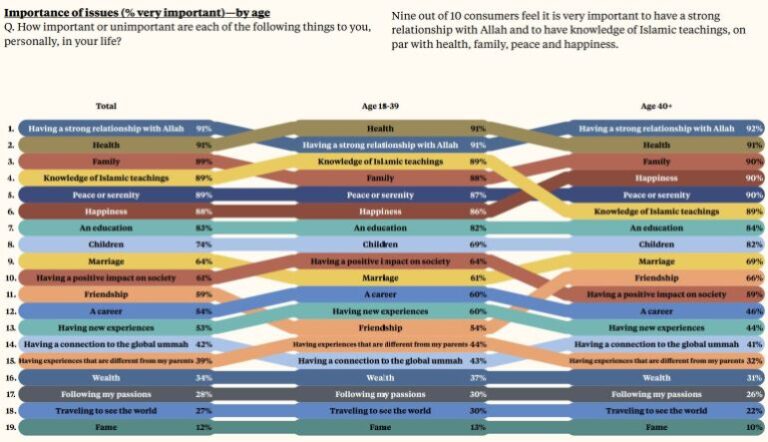 One in three Muslims in Southeast Asia consider themselves more religious than their parents were at their age, with their faith informing decisions around personal spending, fashion, banking, travel and education, a survey has found.

Just 21 percent of the region’s 250 million Muslims say they are less observant than their parents were, while 45 percent consider themselves just as devout, according to the New Muslim Consumer report released on Wednesday.

A strong relationship with God is the most important thing in life for 91 percent of Southeast Asian Muslims, on par with health and just ahead of family, according to the report by Wunderman Thompson Intelligence and VMLY&R Malaysia.

Only 34 percent consider wealth very important, with 28 percent rating their passions and 12 percent citing fame as priorities, according to the report based on interviews with 1,000 consumers in Indonesia and Malaysia.

Growing religious faith and the spread of Western-style consumerism have resulted in Muslim-influenced consumerism evolving beyond food to include everything from modest fashion and fintech in accordance with Islamic law, to Muslim dating apps and Halal travel, according to the report.

“Muslim consumers are increasingly overlaying their religious beliefs on purchase decisions, and how they do so is constantly evolving,” said Chen May Yee, Asia Pacific director for Wunderman Thompson Intelligence.

For Muslim consumers, whether a product is halal, or permissible, is the most important factor when making a purchase, according to the report, with 91 percent of respondents saying it is very important, ahead of value for money, quality and environmental considerations.

More than 60 percent of Muslims consider it very important whether a banking or investment product is in accordance with Islamic law, while 77 percent consider the availability of halal food a major factor in choosing destinations for travel, according to the report.

While most households are male-led, female breadwinners make up a significant minority, with 42 percent of women saying they provide the most financial support versus 70 percent of men who describe themselves as main provider.

Southeast Asian Muslims’ faith also influences their enthusiasm for burgeoning technology such as the metaverse, a nascent form of shared virtual reality, with 85 percent of respondents saying they would like to see virtual spaces made for Muslims and 78 percent expressing interest in virtual religious accessories. However, 59 percent said they do not believe the metaverse is compatible with Islamic teaching.

“Southeast Asia is more than just a Muslim market – it’s a testing ground for the newest global trends,” said Safa Arshadullah, a writer and researcher at Wunderman Thompson Intelligence.

“What happens here inspires Muslims around the world to consistently intertwine faith and function in innovative ways.”