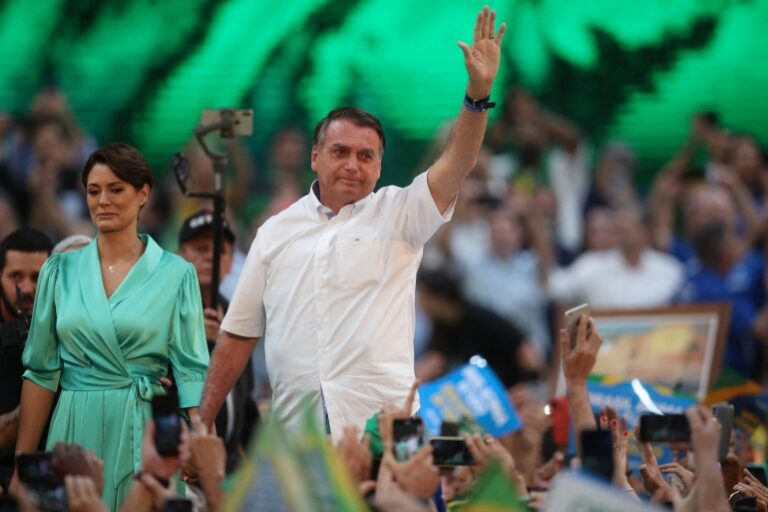 Less than two months until the first round of the contest on October 2, the young street vendor says he sells far more towels of leftist former President Luiz Inacio Lula da Silva than of far-right incumbent Jair Bolsonaro.

“When people come to buy Bolsonaro [towels], they do it quietly and quickly, like they’re worried,” D’Achille told Al Jazeera. “We sell much more of Lula.”

His observations reflect recent opinion polls that continue to give Lula a double-digit lead. In a survey by Brazil’s Datafolha late last month, the former union leader had an 18-point lead over Bolsonaro, with support from 47 percent of respondents compared with 29 percent for the incumbent. If Lula receives more than 50 percent of the vote in the first round, he would win the election outright, without the need for a runoff.

But after a series of sustained verbal attacks on Brazil’s electronic voting system throughout his mandate, observers are worried as to whether Bolsonaro – an outspoken admirer of former US President Donald Trump – would ultimately accept a loss, and what ramifications could follow. Some fear it could lead to an even more violent version of the January 6 United States Capitol riots.

In the run-up to the ballot, Bolsonaro and his allies have cast doubt on Datafolha, a major pollster in Brazil that predicted his win in 2018, nicknaming it “Datafraude”.

“I am so sure that the Datafolha poll is a fraud that I will resign my mandate as lawmaker if Lula wins in the first round,” tweeted Marco Feliciano, an evangelical Christian pastor, Sao Paulo congressman and prominent ally of Bolsonaro.

Towel sellers across the country like D’Achille have been keeping their own tallies on blackboards, a phenomenon that Brazilian social media users have jokingly nicknamed “Data Toalha” (Data Towel).

Still, most analysts expect that Lula’s lead will narrow as the election approaches. “The natural tendency with an election is that whoever has the political machine grows stronger as the vote gets closer,” said Thomas Traumann, an independent consultant who served as social communications minister under Lula’s successor, Dilma Rousseff.

Bolsonaro’s government recently launched a series of economic measures, most notably a 50 percent increase in welfare payments for Brazil’s poorest, from 400 Brazilian reals ($78) to 600 reals ($117) a month. But the payments will only continue until the end of the year – a move that several lawmakers have blasted as a cynical and opportunistic electoral ploy.

Paulo Pimenta, a congressman for Lula’s Workers’ Party in the southern state of Rio Grande do Sul, on Twitter described the increase as “nothing more than a popsicle” that “melts in the heat of unbridled inflation”. But with some 33 million Brazilians going hungry, voting against the increase would have been political suicide, critics say.

While the increase in welfare payments would not likely be enough to swing the election for Bolsonaro, it could help push him into the second round, Traumann told Al Jazeera.

Observers fear that Bolsonaro would contest an election result that does not favour him, setting the stage for an institutional crisis. Late last month, top bankers and business leaders issued a public letter condemning the president’s perceived attacks on democracy. Bolsonaro loyalists hit back, alleging that the banks felt threatened by the president’s policies.

Bolsonaro has called on his supporters to fill the streets on September 7, when Brazil celebrates its 200th Independence Day. “Let’s take to the streets for the last time,” he said at his official campaign launch last month – phrasing that raised eyebrows among his critics.

‘Threats of a coup’

As that date nears, fears of political violence are widespread in Brazil, particularly after the recent killing of a Workers’ Party member by a Bolsonaro supporter in the city of Foz do Iguacu.

“Despite the threats of a coup, we will defeat [Bolsonaro] in the polls and in the streets,” Ivan Valente, a congressman with the left-wing Socialism and Liberty Party, told Al Jazeera. “Bolsonaro is a genocidal figure who, leaving power, will be arrested for the crime of responsibility and will also end up in the International [Criminal] Court.”

Bolsonaro’s opponents have long argued that he should stand trial at the Hague-based court for overseeing soaring deforestation in Brazil’s Amazon rainforest, in addition to his handling of the COVID-19 pandemic, which has killed more than 680,000 people in Brazil.

Bolsonaro himself fears arrest, according to recent local media reports. At last year’s Independence Day celebrations, he promised that “only God” would take him out of the presidency: “I only go out, arrested, dead or with victory. I will tell the scoundrels that I will never be arrested.”

Previous presidents Lula and Michel Temer were both arrested in corruption probes but later absolved.

An especially authoritarian display by Bolsonaro at this year’s Independence Day celebrations could actually backfire on him, Traumann said.

“If it becomes clear … that Bolsonaro will not respect the results, that he will not accept defeat, that he will use the armed forces to contest a legitimate result … then this could create a configuration that may encourage voters that would only vote Lula in the second round to decide that they will vote Lula in the first round,” he said.

Back on Sao Paulo’s main thoroughfare, meanwhile, D’Achille is hoping the election will ultimately go to a second round: “For us,” he says, “elections are good business.”